Peter van der Veen (1958), lived till 1980 in the north of Holland. He left in 1980 and went to Amsterdam. He wanted to become a Publisher of books, and went to the Frederik Muller Academie.

While he was not at the academy, he wrote poems, made collages and began to paint. After he published a book of poems, he notices that painting gives him more pleasure  than writing. He left the academy and became a painter. He is a self-taught artist.

In his paintings his starting point was the pure line, wich has been pushed to the background during the last years.Next to the well known themes like love, death and loneliness, there is in every painting the theme of the repetition.  According to the painter, life is a constant repetition. It is the knack to come within that repetition to a certain kind of dynamics. This dynamics  he tryes to paint.

At first sight the constructed compositions seem to be the result of a lot of thinking and sketching, but they are not. He never makes sketches on paper. When he is painting, he draws, with the help of that painting, the next one in his mind. One painting leads to another painting, in this way his oeuvre grows.

Striking is the use of colourful patterns. They are spread over the canvas, like confetti. At first sight the patterns seem to be purely decorative, but they are not. The patterns make the dynamics within the painting, there becomes rhythm in the painting. Peter van der Veen is a member of the CBK Drenthe and Chairman of the Take 5 group. 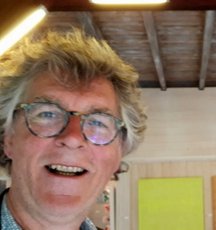 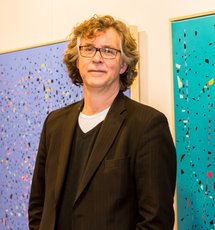